Our latest project is up and ready to go! The Flash Project is another long-term project to create library assets for some of the most popular games created in Adobe Flash. 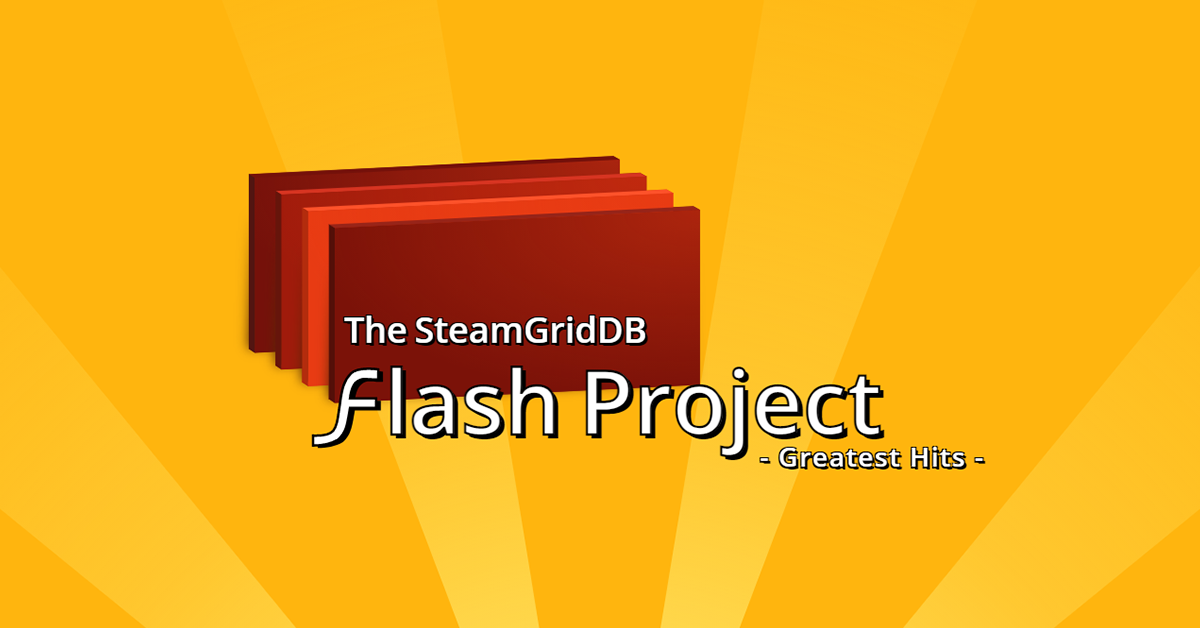 For API users, we have a new external platform "flashpoint" that you can use to query assets via their game UUID.
Note that not all games in Flashpoint will exist in our database since we have to add/associate them manually. Anything currently in the project and any more we add are ready to use though!

The tests mentioned in the previous update are still underway. One of the more obvious changes is the introduction of a new sorting option. (Selected by default, the old one can still be manually selected.)
We'll continue to keep a close eye on everything and make adjustments accordingly. The process of designing a system that everyone is happy with is long and complex, so please bear with us. Votes will remain hidden until everything is finalized.

In the next few weeks, we're going to be running some experimental tests and changes with how assets are discovered, sorted, and interacted with.
Some of these tests will be obvious, some subtle, and some changes will be in the background and you probably won't notice anything.
Everything introduced will be iterated upon or scrapped depending on the results. Not every change will be announced as they happen. Please bear with us.

The following filters are currently available:

Some filters are only available to logged in users due to technical limitations. There will be more filters added in the future.
You can get to the filter settings by clicking "Global Filter Preferences" within search results. (Or you can just click here)

Support has been added with support for ICO files and PNGs.
Not to be confused with square grids. Please read this to get an idea on the difference.

Now out of beta! The new search allows for much more freedom when searching for games. See below for some of the changes compared to the previous site search.

The new asset view is complete and is now live on all pages. Thanks to everyone who helped test and provide feedback during development!

The entire site front-end (and lots of the backend) was rewritten from scratch. You might won't see much of a difference since it was designed to look mostly the same. There are a bunch of small changes everywhere but it would be cumbersome to list them all here.

The asset filtering part of the search is now out of beta, but changes to the main search is still in the works.

A project to create covers for popular Half-Life mods in the style of the classic Half-Life box arts. See the project page for more details: https://www.steamgriddb.com/projects/goldsrc

Special thanks to Jib for stepping up to manage this project!

The new search is now available for testing. To make it easier for me to keep track of bugs or catastrophes, the beta search will only be available to Patrons and Moderators. Access will open up to everyone else once it is deemed stable enough for a large amount of testers. Only available for game pages for now. It will be extended to user pages, the home, and the main search before the beta ends. To opt-in, go to a game page and click "Try out the beta search!".

By popular demand, changes have been made to the Wii U project to make it more doable.

The Tetris Project was briefly opened up again after more official games were found. As of today is has been completed again and I've awarded the new contributors the Tetris Artificer badge, enjoy!

The project to complete assets for every official Tetris game (and some bootlegs and fan games) has been completed! Everyone who contributed to the project has been awarded the Tetris Artificer badge. Check your profiles! :TetrisArtificer:

We now have a notification system with (very) basic functionality. I'm releasing this early to get the mod tools out sooner. Expect more polish and use out of this in the future!

Thanks to the feedback from the moderators, I have extended the reporting system to allow the reporter and moderators to comment on a report they made in case further discussion is needed. Moderators will also be able to lock assets from being edited by the uploader in response to special cases. You will also be alerted if a moderator has made any changes to your assets.
All of these integrates into the new notification system.

You can now reports assets by clicking the report icon (🚩) below the image.

I've set up a Trello board so you can see what I'm currently working on and what is planned. https://trello.com/b/bhrqOQGX/steamgriddb-roadmap

Introducing The Tetris Project, a project whose goal is to make assets for every single Tetris game out there (and some not out there). https://www.steamgriddb.com/projects/tetris

You can now delete your account and all data related to it from the preferences page.
Deletion is permanent and cannot be undone. it'll be like you never existed

I've added the ability to choose a logo type on upload, I encourage you to change the style of your own logos (click the gear), or report any other uploads that are wrong. If you have a huge bulk of logos, let me know and I'll fix them for you.

The projects feature that nobody asked for is now live starting with the Wii U Library project!
https://www.steamgriddb.com/projects/wii-u

Projects will be used as a way to have a concentrated effort to create assets with a specific goal in mind and track progress while doing it.
These are considered to be long-term and aren't expected to be 100% complete at all. (But hey I won't stop you guys from trying anyway :wink:)

If you feel the itch to create assets but don't know what to work on, this would be a great start. The Wii U was chosen as the first project for several reasons:

I spent around 2 weeks scraping the eShop and assigning each game to the proper game in the database.
As a result, API users can easily query for assets via the eShop title key, product code, or the shop uid.

More projects will come depending on how this is received.

SteamGridDB now has a Patreon!

The site has become a bit more expensive to run with influx of new users, pledging to the Patreon will help us cover some of the costs.
I've added some cosmetic Patron-only features to the site and the Discord.
https://www.patreon.com/steamgriddb

Logos can now be uploaded to the site!